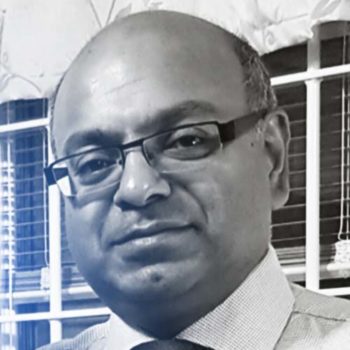 Prosun Bhattacharya (1962) holds a PhD in Sedimentary Geochemistry from University of Delhi, India (1990). He is a Professor of Groundwater Chemistry and Coordinator of the KTH-International Groundwater Arsenic Research Group, at the Department of Sustainable Development, Environmental Science and Engineering at KTH Royal Institute of Technology, Stockholm, Sweden. Since 2016, he is also an Adjunct Professor at University of Southern Queensland, Australia. He is engaged with research on groundwater contamination in sedimentary aquifers in different parts of the world, especially focusing on geogenic contaminants – arsenic and fluoride. He has collaborative research engagements with several universities and research organizations across the world. He has coordinated the prestigious Swedish International Development Cooperation Agency supported action research and implementation project “Sustainable Arsenic Mitigation-SASMIT” Community driven initiatives to target arsenic safe groundwater as sustainable mitigation strategy in Bangladesh* (2007-2017). He is currently leading a project on “Enhancing private sector capacity for scaling up access to safe drinking water – policy, systems strengthening and sustainable service delivery” in collaboration with UNICEF-Bangladesh.

He has authored/co-authored over 400 international publications in peer-reviewed journals and conference proceedings, cited more than 10,000 times (Google Scholar and Google h-index 48) and i10-index of 130. He has organized several international workshops on natural arsenic in groundwater and sustainable mitigation and edited 10 books on diverse aspects of natural arsenic in groundwater and groundwater for sustainable development until 2018. He is serving the Elsevier in the different editorial capacities since 2009, as Editor in Chief of Groundwater for Sustainable Development, and Associate Editor of the two reputed journals Journal of Hydrology and Environment International. He has been honored as the Fellow of the Geological Society of America in April, 2012 and the International Water Association (IWA Fellow) in September 2018.

Arsenic in groundwater – a challenge to global water security

Water underpins every aspect of human and environmental existence and thus forms the core of sustainable development. It is critical for economic development, environmental sustainability and human wellbeing. Freshwater demand is increasing globally, primarily to meet the needs of drinking water supply. Arsenic (As) is a priority geogenic contaminant in groundwater, impacting water security on a global scale. Early during the 1980s, the presence of natural (or geogenic) As in groundwater was identified in the state of West Bengal in India at concentrations that caused severe health impacts to millions of people. In the following decade, groundwater As contamination also emerged as a major challenge in other parts of South Asia. Occurrence of As in groundwater exceeding the WHO guideline  is also well documented in Taiwan, Hungary, Chile, Argentina and several other countries with new discoveries still coming to light in many other countries.

Based on our decade long research, we have developed key strategies for Sustainable Arsenic Mitigation (SASMIT), including a i) highly acknowledged Sediment Color Tool for safe aquifer identification and ii) a novel arsenic removal technique known as the Advanced Oxidation–Co-precipitation–Filtration (AOCF) process which is capable of reducing As to levels that are ten-folds lower than the current WHO guideline. All this work has been carried out in close collaboration between academia, the civil society, private sector and the governmental stakeholders.

The plenary talk will also cover the key messages of our recently published IWA Best Practice Guide on the Control of Arsenic in Drinking Water which summarizes the aspects of the distribution and mobilization of As in groundwater, exposure, health impacts, biomonitoring and remediation. This also included social and the economic determinants, which provides a very timely and valuable contribution to disseminate useful knowledge to address global challenges for the crisis of drinking water contamination with arsenic, and innovative strategies and technologies underpinned by fundamental scientific research.